Istanbul again – the 4th time for me to conduct KonTek Otomasyon to the „World Of Industry“ fair in Istanbul.

This year KEBA sent a lot of new stuff to the exhibition – beside the big robot demo, you will see a innovative multitouch monitor and the KeDrive for KeMotion solution, which we already presented on SPS 2012 in Nürnberg.

Leaving Linz with the latest flight to Frankfurt – the plane was half empty. In Frankfurt I went through passport control without any issues (last time my old passport was worth to complain … my new one seems OK) and the searched for the next Lufthansa Business Lounge. There I took a real „dinner for men“ – which consisted of a pint of „Weissbier“ and a hot-dog.

After recognizing that I was one of the last people in the lounge, the Lufthansa lady told me to go to my flight, as otherwhise I would miss it – so I made my way to gate Z52 and took the plane to Istanbul. My passport was accepted by the local police and I could enter Turkey after this visa-guy sticked a ugly visa-sticker in my beautiful, virgin passport … and loveless threw a stamp on it.

Glad that I ordered a airpot shuttle at the hotel I steped into the black Mercedes-VIP-Limousine and took a short nap to the hotel, which I entered 40 minutes later. The receptionist was friendly and greeted me with my name – sure I was the last one getting the hotel room today and he was somehow waiting for me, but for me this is also a sign that I was definitely too often on a business trip here. 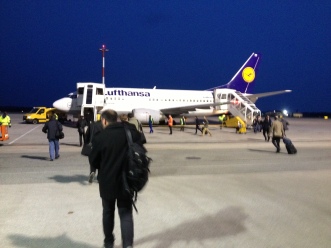 Boarding in LINZ … yeah, we live on the countryside.

BYOTEL … as always a good ***** choice for a reasonable price.

It was planned that I will be picked up at 11am, and as I was awake at 9am already I had some time for shower, breakfast and presents …
Yes! Presents! … Since I am on business trip my beloved son Lukas, my wife Berni and now also the twin babies Hanna & Clara get a present from EVERY business trip I am on. One lesson learned over the past 5 years of traveling: don’t think about the presents on the last days of the trip, don’t think about them in the middle, care for the presents already in the beginning or on arrival – the time is running out during the trip and it can really stress you to look for last minute presents at the duty-free-shop at the airport!

When I was picked up – finally Ilkay came 11:30 – first thing we did was going out for lunch. Kebap – as almost 90% of lunch and dinner ends up with a bunch of meat, vegetables and herbs. Then we moved on to KonTeks partner company TekKon, where the exhibition demos are pre-built … the plan is to save time at the fair – the plan never works out! So I did the best to start up the robot cell, and after 3 hours we saw that everything was perfect. We moved back to office and did some work in Ilkays new office – he was promoted to channel sales manager this year … and after work we drove to a restaurant which serves … exactly … Kebap. A perfect ending of the first day on this trip – thanks to Ilkay for feeding me 😉

everybody is interrested in the box

How to get the box to another location? 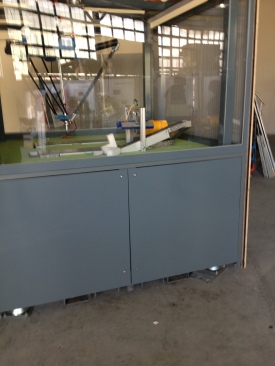 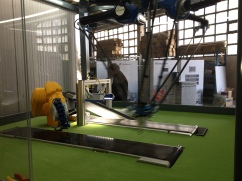 Unpacking, connecting, running! Thx to my guys in Linz!

Picked up at 8am I really had to hurry up to start the day – 7am alarm clock, 7:05 shower, 7:10 my family called, 7:15 breakfast, 7:45 check out, 7:50 Hayri was already waiting … good guy, when he says 8am he is there at least 5 minutes earlier, even if I thought traffic would make it impossible to be punctual this day. Arriving at the office we recognized that we are the second ones arriving and have to wait for somebody with the keys.

After half day of working in Ilkays new office (he was at the customer to manage some new orders) we moved to the Tuyap fair after lunch to start up the demos.
First stop – Kaya Ramada Hotel ***** – this time I got a room upgrade and I was very happy about it. The upgrade seems not to make the room bigger, I just got a real non smoking room (last time you could still smell cigaretts in my „non smoking room“), a brand new flatscreen, a seat on which you not fall throgh, a panoramic view over the highways of the neighbourhood, renovatet furniture and … last but not least … a bunch of pillows on the beds.
Then we drove the 400m to the fair – Hayri insisted on it – and when I arrived at the booth I saw … nothing … not exactly nothing, but no walls, no demo, no robot. Everybody who is used to German styled fairs now will feel a kind of pressure – how should everything be finished before the fair opens in … 18 hours! But as I am already used to this style of fair constructions, I knew that the marketing manager Rezzan has everything under control, and she will care for all things to be done before the fair opens tomorrow moning!

Finally after 2hours waiting time MY robot arrived 🙂 the forklift driver liftet the robot through the fair hall at a height of 4 meters above everybodys heads … if you think somebody ran away of fear beeing slayed by a robot-demo-cell you are wrong! When we placed the robot on the right edge of the booth and in the right direction, we could start to wire and air-plumb everything. Luckily we could push the start button just 30minutes after the arrival of the cell – a new Turkish record for me (last year we were waiting for the robot until midnight, for air-plumbing until 2pm in the morning and finally I resigned at 4am in the morning, as the robot was not doing what I wanted him to do). One hour and a Kebap dinner later the boxes for multitouch monitor and KeDrive 4 KeMotion arrived from customs and we could continue with that demo.

Believe me or not – it’s 10pm and I am sitting in my hotel room writing these lines now … I finnished commissioning really early this time, could take a shower and now … go to bed.

Have a good night and sweet dreams!

booth – when we arrived 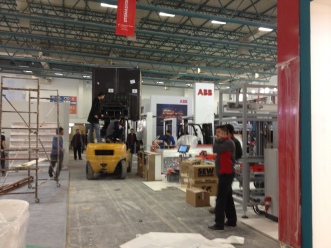 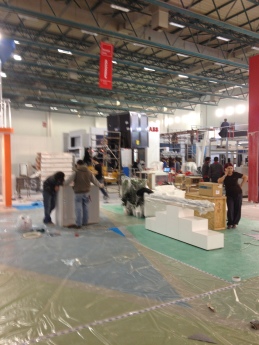 wiring of the demo

still some painting work to do

it begins to materialize 🙂

Ilkay playing on the multitouch 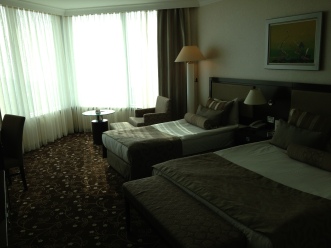 Hotel Room … I got a upgrade

… and it still moves!

some chips sometimes stuck in the channel 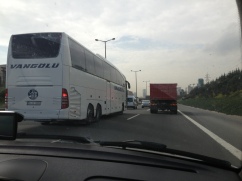 Istanbul traffic … this time not too heavy 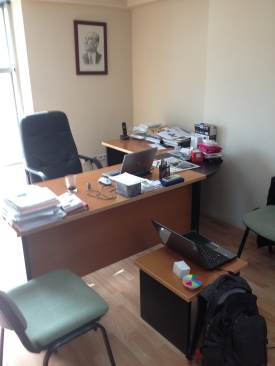 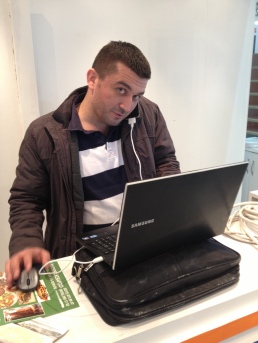 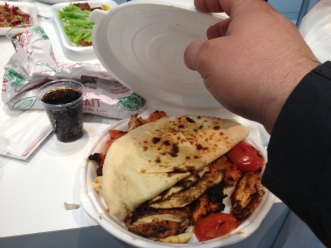 most important tool in Turkey … a tea-cooker

KEBA videos will be shown here

view from above – the robot should arrive soon

a management position would fit to me

The fair beginns … in the morning, after breakfast I arrived at a relatively finished booth. Rezzan – KonTek marketing manager – looked very tired but happy to have the booth finished before the fair opens. For the first day the exhibition started powerfull – we had a lot of discussions with potential customers the whole day … only after 5pm the stream of visitors started to slow down and end.

During a telephone call at the end of the day with my US colleague there was a sudden BANG … and a whole booth collapsed! It was just pure luck that nobody was hit by a part of the booth or burried by the parts … the reason for the collapse was that the booth has not been fixed at the wall of the hall, and got overbalance on the frontside.

To close the day I went for … tataaa … KEBAp with Ilkay. After dinner I did 30 lengths in the pool, relaxed a little on the couch and then did some eMail work in the hotel room … and now I uploaded these photos to show you some images of this day.

a lot of people for day 1

relaxing after a hard day

he does a good job

KonTek landed in the app century.

the longest 200m in life 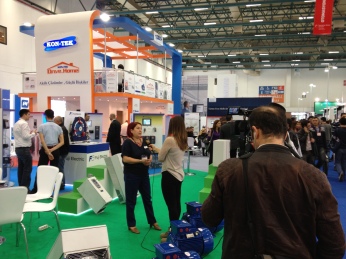 half hour after opening

KEBA part of the booth 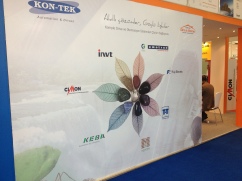 Finished booth in the morning!

the cafe-bar in the first floor

a crowd in the morning

Friday, 10am … the booth is ready, the visitors are entering the halls. The last day of my trip was, on the fair, the same as Thrursdays.

Also getting home was – compared to the last time I left Istanbul – very uncomplicated … the flights were on time and I even arrived in Linz five minutes earlier than expected. That’s how it should be. By the way … next time I might arrive at airport SAW, which is on the Anatolian side of Istanbul, much closer to KonTek and better to reach.

Thanks to KonTek, especially Ilkay and Hayri, for this successfull week in Istanbul! 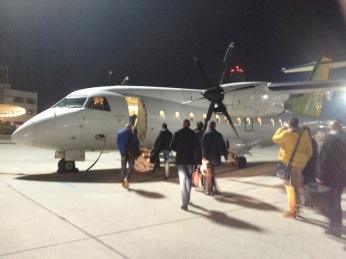 starting from May … flights to SAW!

Sometimes we have vaccuum problems.